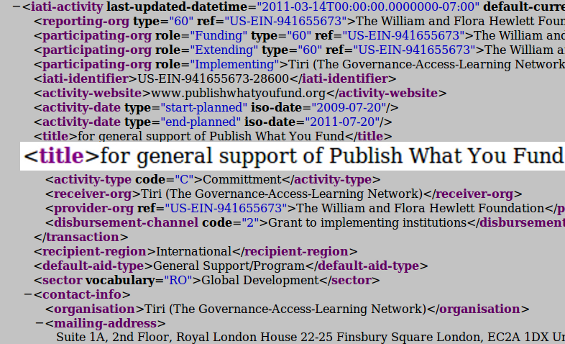 Good news for IATI today as The Hewlett Foundation became the second donor to publish to the IATI standard, releasing data on their global development and international population grantmaking.

The Foundation’s move to publish their data to IATI is part of a trend of foundations that have expressed interest and support for IATI. As aidinfo have reported previously, the Gates Foundation has said it will take steps to publish more detailed and timely data consistent with IATI standards. Meanwhile, the U.S.-based Foundation Center has recently become involved in IATI’s Technical Advisory Group (TAG) and is working on mapping its own reporting standard to the IATI standard, with funding from the Hewlett Foundation.

Like many other US foundations, Hewlett already provides significant data to the Foundation Center, so there is nothing new in the content of the data that is being released today. IATI’s added-value is that the data is now being published in an internationally agreed, open, common format. This will enable more organisations to access, compare and combine it with other data sources in a myriad of ways to meet individual needs.

From IATI’s perspective, it’s encouraging to have a philanthropic foundation amongst the early implementers of the Initiative. The fact that Hewlett have been able to take the data they already make public and convert it into the IATI format demonstrates that the IATI standard can be adopted by non-traditional donors, as well as official donors that already report to the OECD DAC. This is important for users in partner countries, who have consistently asked for data from a wider range of aid providers.

The data released today will be published in a raw, xml format (as seen illustrated) and indexed in the IATI registry. The registry is a central reference point for all data published by IATI signatories. Once this raw data is published, it is ready to be taken up by developers, analysts and infomediaries who can mash it up with other data, transform it into meaningful visualisations and expose useful trends and features.