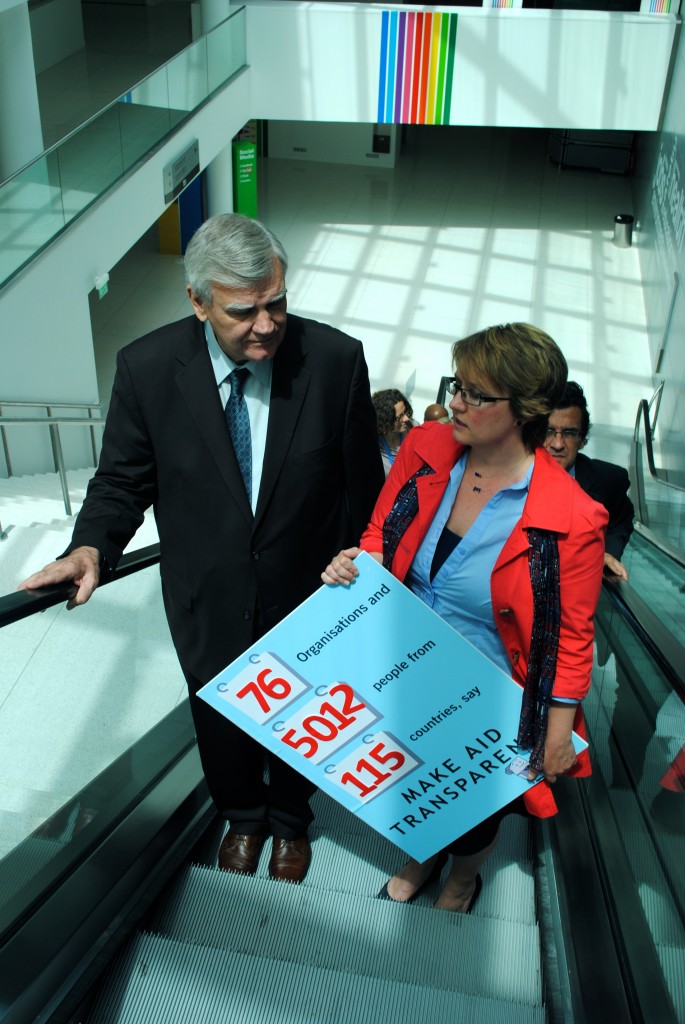 The first handover of the Make Aid Transparent petition signed by 5012 people from 115 countries took place at a crucial meeting of aid officials at the headquarters of the Organisation of Economic Cooperation and Development (OECD) in Paris yesterday.

The co-Chairs of the Working Party on Aid Effectiveness, Talaat Abdel Malek and Bert Koenders, were handed the petition by Antonio Tujan, Chair of Better Aid, and Karin Christiansen, Director of Publish What You Fund, in front of over 100 country delegates. The petition was also received by Brian Atwood, Chair of the OECD Development Assistance Committee (DAC).

On receiving the petition which demonstrates public demand for increased transparency, Bert Koenders thanked the campaign representatives and said “this is exactly what we need”. He said he looked forward to discussing the issue of aid transparency with the country delegates attending the Working Party plenary, later that afternoon. Brian Atwood also congratulated the coalition on its achievements so far.

Speaking later in the plenary session, Taalat Abdel Malek said transparency was an issue that had a ‘special urgency’ and had prompted the highest number of interventions from conference participants. A number of developing country delegates, including from Honduras, Ghana, Zambia, Rwanda and the DRC, spoke strongly about the importance of increased donor transparency for their development efforts.

The Make Aid Transparent campaign calls on aid donors to publish more and better information about the aid they give, in line with the international standard. The campaign launched last month and is currently endorsed by 76 organisations from both donor and recipient countries. It will culminate at the Fourth High Level Forum on Aid Effectiveness in Busan, Korea at the end of the year where donors will be judged on their progress towards keeping promise to increase the transparency of their aid.

Contact: Claudia Elliot of Publish What You Fund on +44 207920 6401 or +44 7792 114449
Notes: For more information about aid transparency and a full list of participating organisations visit www.makeaidtransparent.org