The 2012 Aid Transparency Index shows a slow but steady improvement in global aid transparency. But despite this progress, it also finds that most aid information is still not published.

The Index ranks a total of 72 bilateral and multilateral agencies, selected climate finance funds, humanitarian agencies, development finance institutions and private foundations have also been included. A combination of political will, pressure from civil society, and technological progress has seen this year’s average score rise to 41 per cent – a modest 7 per cent rise from 2011.

The United States follows this trend.

As a group, they received an overall average score of 45% – a little above the average score.  Collectively, they showed a wide variety of performance, ranging from MCC’s “fair” rating to DOD’s “poor” one. Despite the significant spread, no U.S. institution scored in either the “good” (above 80%) or the “very poor” (below 20%) categories.

However, the U.S. has shown a government-wide commitment to increasing transparency over the past two years. Both domestic and international initiatives have contributed to improvements in transparency by U.S. agencies, but the real game-changer was the U.S. signing up to the International Aid Transparency Initiative (IATI) in Busan last November.

By joining IATI, the U.S. administration has agreed with the global consensus that if aid is to ever truly be effective, it must also be transparent. Transparent aid means information being shared openly in a timely, comprehensive, comparable and accessible way.

And progress has certainly been made. Some U.S. institutions made significant jumps in their scores, compared to 2011. Across all donors, the overall average improvement was 3 percentage points, and including only those 36 agencies that improved their score, the average increase was 8 percentage points. Other than Department of State, the ranked U.S. agencies outperformed both of these averages.

But when compared to other very large donors, such as the World Bank and the European Commission, the still U.S. performs relatively poorly.

The UK Department for International Development and the World Bank became the first two organisations to ever receive a ‘good’ rating. Six organisations – including the African Development Bank – also rose in 2012 to join nine others in the ‘fair’ category.

Unfortunately, the poor and very poor groups still contain nearly half of all organisations surveyed – including some of the world’s largest donors, such as France.

Nine of the top 16 ranking donors have begun publishing to IATI, significantly improving the availability of timely and comparable information. Some of the biggest increases in rankings can be attributed to donors, such as Australia, publishing information via IATI.

But as the Index shows, there continues to be too little readily available information about aid, undermining the efforts of those who both give and receive it. All donors should publish ambitious implementation schedules, in line with their Busan commitments, by the end of 2012 – and start publishing in 2013. This timeline is essential if donors are to deliver on their Busan commitment of full implementation by December 2015.

The U.S. is now in a position to lead on the aid transparency agenda. When all agencies are publishing consistently to a common standard, it will help to improve – and demonstrate – the value of their aid. It will also help to encourage other, newer donors to improve their transparency.

For aid to be fully transparent, donors must publish information to IATI. Only then can aid and related development activities be made truly effective, efficient and accountable. 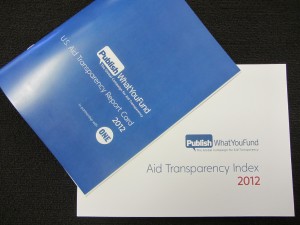