Home / Blog / Freedom of Information in the 2012 Aid Index

The 2012 Aid Transparency Index not only assesses what current aid information is published by donors – it also includes an assessment of the quality of a donor’s Freedom of Information (FOI) legislation. A robust and well-defined FOI policy is a key element to a donor’s overall transparency. These policies effectively open a donor’s transparency agenda to public demand, leading to the publication of information that donors may not publish otherwise.

The first indicator used in the Index measures the donor’s quality of Freedom of Information Act. The data source used for this indicator is the Global Right to Information Rating, published by the Centre for Law and Democracy and Access Info.[1] The RTI Rating assesses the strength of the legal framework for guaranteeing the right to information, using a 150-point score based on a 61 indicator survey.

For the purposes of 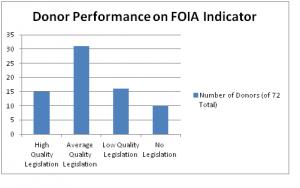 our 2012 Index, this score was broken down into a four-point scale to maintain consistency with the scoring methodology used for the other indicators included in the Index.

So how did donors do on this indicator? Only six of the 72 donors assessed scored the highest possible score of 4, or 90 or higher in the RTI Rating (they are: Brazil, the European Union, Finland, New Zealand, Norway, Slovenia, Sweden and the United Kingdom). On the other end of the scale, nine bilateral donors either have no legislation or have poor quality legislation, earning them the lowest possible score for donors with FOI legislation. (Those with no legislation or legislation that is not currently in use by the executive government are:  Cyprus, Luxembourg, Malta and Spain; those with poor quality legislation are: Austria, Belgium, Germany, Greece and Italy).

The quality of the legislation tends to be related to its age: the average age of FOI legislation in the RTI Rating’s top 20 is just five years, with the exception of Finland, whose Act dates back to 1951. For the top six scorers in the Index, three Acts are less than 12 years old, though the average of this group is skewed by both Finland and Sweden, the latter of whose policy is 146 years old! This suggests that the substance of strong Freedom of Information legislation has changed dramatically over the past few decades. Many donors that have instituted FOI Acts in the 1970s and 80s have now fallen well behind newer, stronger and more elaborate pieces of legislation. The time may now have come for lower performers to update their existing Acts.

As the RTI Rating does not look at the multilateral, private or climate finance donors assessed in the Index, Publish What You Fund developed a methodology to assess these donors’ policies based on research conducted by the Centre for Law and Democracy. These donors were scored on two items: the presence of an Access to Information or disclosure policy and how well defined the limitations for non-disclosure are in these policies.

The Index focuses on limitations as they are the substantive balancing act between the public’s right to know and the organisation’s need to keep some information private. The public’s right to receive information about a donor’s activity is not unlimited. Donors should not be required to publish information that is commercially sensitive and they have a right to privacy in order to protect the necessarily candid nature of internal deliberations. At the same time, donors cannot use this need for privacy inappropriately, such exceptions must remain tightly defined and be established based on a harm test, which effectively asks whether the harm done to the parties concerned outweighs the public’s benefit in being able to access this information. Admittedly, the focus on these exceptions is a somewhat crude tool to assess the quality of such policies. However, on a four point scale, a focus on such exemptions cuts to the core of the effective balance between the operational needs for privacy and the rights of the public to access information.

Based on this methodology, no non-bilateral donor has achieved the highest possible score, while UN-OCHA, the Hewlett Foundation, the Gates Foundation, the Global Environment Facility and the Adaptation Fund scored a zero on this indicator. The climate finance organisations are in a unique position, as coordinating bodies between donors, they are not required to have their own Access to Information or disclosure policies, but must publically state which organisation’s Access to Information policy is relevant in a given context (for example, the Clean Technology Fund does this through its Note on Disclosure of Documents).  While the right to information has been a well-established principle in governments, it is clear that non-bilateral donors are well behind the curve on this crucial issue.

For a more detailed discussion of our FOIA indicator and the scoring methodology, please take a look at Box 6 on p.18 of the 2012 Index. We are always looking for feedback to improve the Index. Do you have any ideas of how to improve the FOIA indicator or other data sources we could use, either for bilateral or non-bilateral donors?

[1] For more on the Global RTI rating visit: http://www.rti-rating.org/.