A popular newsletter, The Nelson Report, recently called former Senator Richard Lugar a “national treasure”.  In my view, that is an apt description. During his 36 years in the Senate, Senator Lugar left his imprint on a broad range of international issues. By winning the Commitment to Development “Ideas in Action” Award, his outstanding efforts in the development sector are being formally recognized. 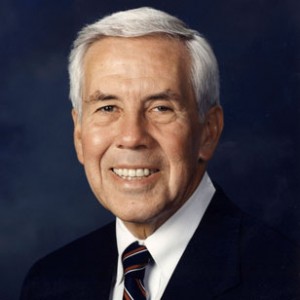 Sponsored jointly by the Center for Global Development and the FP Group, publishers of Foreign Policy Magazine, the ‘Ideas in Action’ award is for “changing attitudes and policies of the rich and powerful toward the developing world”.  Senator Lugar, who served as chairman and ranking Republican leader of the Senate Committee on Foreign Relations, has been given this prestigious award for his bipartisan endeavors to tackle the most fundamental development issues and to help the poor who are most heavily affected by them.

Senator Lugar transformed lives around the world through his pioneering efforts on the President’s Emergency Plan for AIDS Relief, vaccines, the Millennium Challenge Corporation, and global food security. He was a force for the creation of enterprise funds, for reforming the multilateral development banks and for supporting democracy, among other development innovations.

As a member of Publish What You Fund’s U.S. Advisory Committee and a former adviser to Senator Lugar, I congratulate him for this well-deserved honor, earned in part through his dedication and support of transparency issues, both domestically and internationally.  Senator Lugar saw that corruption squandered development funds and enriches dishonest officials and contractors, leaving impoverished nations with the burden of the resulting debts.

As Bono so aptly said, “Corruption is deadly, but there’s a vaccine for that too—it’s called transparency. Daylight. It’s much harder to rip people off when they know what’s going on.”

Senator Lugar recognized the substantive ways to fight corruption through transparency. Early in his second tenure as Committee chairman, Senator Lugar launched a major initiative to promote transparency and anti-corruption measures at the World Bank and the other multilateral development banks. Though his efforts were initially met with resistance, they were embraced by reformers and have been integrated the development banks operations.

Most recently, he introduced the Foreign Aid Transparency and Accountability Act of 2012, which would codify the disclosure of U.S. development assistance through the Foreign Assistance Dashboard. In addition, the U.S. Securities and Exchange Commission (SEC) has adopted the final rules implementing the Cardin-Lugar amendment on extractive industries disclosure, which he co-authored. This groundbreaking provision, now being considered by the European Union and numerous countries, requires all oil, gas and mining companies to disclose their payments to governments.

The Foreign Aid Transparency and Accountability Act aimed to ensure that information from the U.S. government is accessible in a timely and comprehensible manner. Most importantly, this information needs to be comparable with data from other donors, which means that quick conversion of U.S. data to the International Aid Transparency Initiative (IATI) standard is critical.

U.S. implementation of IATI is now moving forward with the first IATI publication and the U.S. implementation schedule. Legislation such as Senator Lugar’s cements these efforts and is crucial to ensure the sustainability of investments in aid transparency and to increase momentum at the time of delivery.

I congratulate Senator Lugar and his dedicated staff on this impressive award and thank him, profusely, for making transparency a core component of his legacy in the Senate. His clarity has made our world better.

Nilmini advances technology policy for an association of premier global companies, the Information Technology Industry Council.  She previously served as a senior aide to the Senate Foreign Relations Committee on international economic and development issues.  She spearheaded legislation on transparency and anti-corruption including the Cardin-Lugar amendment on extractive industry transparency and ratification of the U.N. Convention Against Corruption.  She also influenced legislative action on foreign assistance, development bank reform, and debt relief.