The UK is a global leader in open data but the picture is still mixed across government activities and departments when it comes to international aid information.

Although DFID accounts for the lion’s share of UK aid spending, there are other important players, notably the Department of Energy & Climate Change (DECC), Foreign and Commonwealth Office (FCO) and the Ministry of Defence (MOD).

Publication of international aid information is a flagship transparency initiative for the UK Government, with DFID and DECC both publishing to the cutting-edge global aid standard – the International Aid Transparency Initiative (IATI).

Last week, the FCO showed its intent to join them by publishing its plan for implementing the IATI open data standard. Along with this ambitious plan, FCO produced a simplified set of “milestones” for delivering timely, comparable and accessible aid information.

FCO’s attitude to aid transparency has clearly shifted from last year’s open data strategy, which recognised its shortcomings but promised little action. Its IATI “milestones” document is quietly revolutionary – explicitly committing itself to a radical overhaul of the way it shares information on its development activities with the world, and putting delivery dates on it. That is something that deserves a cheer.

However, recent aid figures produced by the UK for the OECD had a troubling omission. Whereas total aid spending is specified for DFID, DECC, no total figure was given for MOD’s official development assistance (ODA): 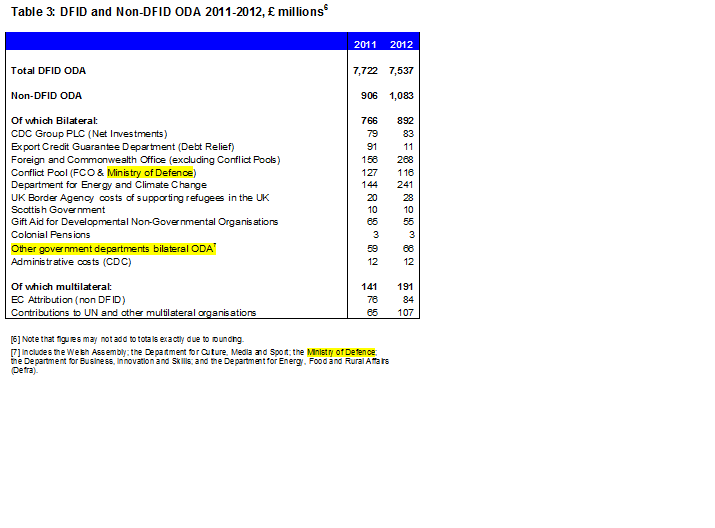 In the case of MOD, there are of course legitimate concerns about disclosing sensitive information – especially on grounds of personal safety and national security. However, the fact that the MOD cannot or will not produce even a total spend on ODA cannot be defended on sensitivity grounds. It suggests one of two options: either MOD is in denial about its role in international development, or it does not have fit-for-purpose information systems. It may well be both. The Conflict Pool is a case in point – its activities are neither transparent nor is political ownership well defined (being a joint venture of DFID, FCO and MOD). Who has responsibility for publishing information about it?

But is it worth fighting for this information, given that MOD’s aid spending is tiny in comparison with DFID’s? Well, when you consider that this year’s ODA figures show a rise in non-DFID aid spending, I’d say yes. And then there’s the recent statement from the PM which suggests that the Government may further reduce DFID’s proportion of the aid budget – further reason to fight for the MOD to become more transparent.

It got me wondering: what are the crucial drivers for change? MOD and FCO are both being “guided” by Cabinet Office’s open data strategy and Number 10’s transparency drive. So why is FCO taking the plunge whereas MOD so resolutely isn’t?

One of those drivers is external pressure. But perhaps more crucial is the presence and authority of internal transparency champions – people who realise that openness is not just a duty, but an opportunity. Working in silos and hoarding information is a barrier to effective coordination, feedback and improvements to programming.

We will continue to push MOD to follow the lead of the other government departments, which now happily includes the FCO, in becoming more transparent – particularly if it is to take on more development work in the future.

If you’re interested in seeing how all the UK aid agencies stack up against one another, please read our UK Aid Transparency Report Card.