Cross-posted from the OKFN Labs blog.

Back in April, I wrote on the Open Knowledge Foundation blog to launch the first component of our Aid Transparency Tracker, a tool to analyse aid donors’ commitments to publish more open data about their aid activities.

At the end of that post, I pointed to our future plans to also monitor the quality of publication. It is possible to do this programmatically because donors have agreed to publish their data according to the IATI Standard. 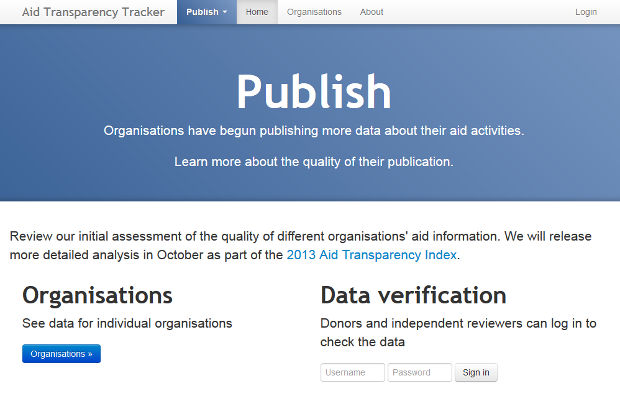 Over the last six months we’ve spent a lot of time building a framework for testing the quality of aid donors’ IATI data, as well as a survey tool to capture data not available in the IATI format. We launched this to donors last month.

We will be releasing the results as part of our 2013 Aid Transparency Index in October. In the meantime, I wanted to give a sneak peak of some of the things the Tracker can now do. All the source code is on Github. 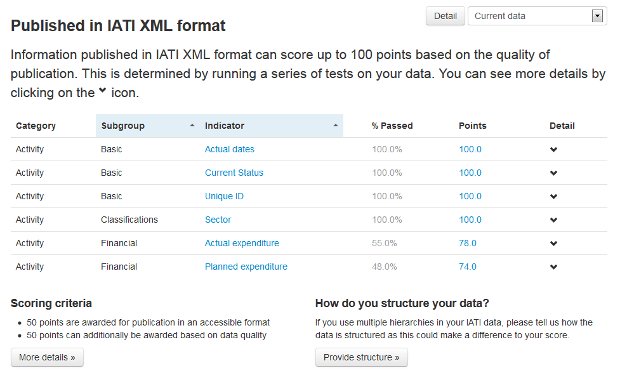 The biggest part of this tool is the automated data quality analysis. This works as follows: 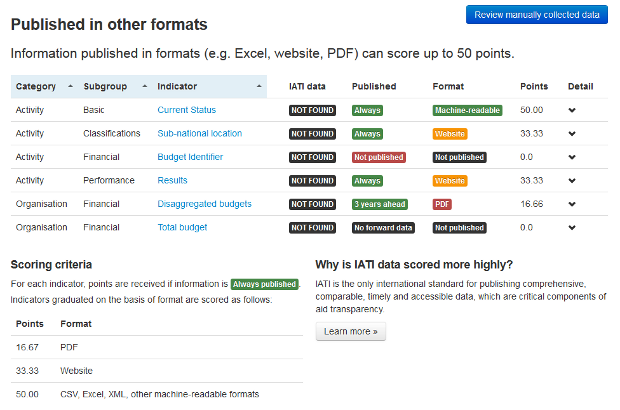 In previous years, we used Global Integrity’s Indaba platform for the survey. However, because of the quite different way this year’s Index is constructed, we decided to build our own bespoke survey tool.

Many of the donors we include in the Index have not yet begun publishing data to IATI, and none of them are yet publishing all of the fields. We need to capture this information in the Index, while encouraging donors to publish as much as possible in their IATI data.

What we’re aiming to achieve

Finally, it’s worth emphasising what we’re trying to achieve from all of this, and looking at the extent to which we’re doing that already.

We’ll be presenting the Aid Transparency Tracker at OKCon in Geneva in September, and talking about how it could be used as a basis for monitoring the quality of data in other open data spending standards.

In October, we’ll be launching the full results and analysis as part of our 2013 Aid Transparency Index.

We would also very much welcome any feedback. Please get in touch: