Transparency is a hallmark of good governance. It empowers citizens and keeps government officials on task and shields them from undue political and private pressures.

The sunlight of transparency shields public officials from inappropriate pressures and requests and keeps them focused on their responsibilities, as they know that their actions are subject to public scrutiny. It provides the means for officials to stay close and relevant to citizens and to communicate their policies and actions. It improves policy-making, not just by engaging and better informing citizens, but also by better informing government officials who often lack knowledge of what others parts of government, both local and national, are doing.

For this and many other reasons, transparency and accountability should be a key topic of discussion at the U.S.-Africa Leaders Summit next week.

Open data is particularly important for development cooperation. Many countries receive assistance from a host of bilateral donors, international organizations, and private foundations and NGOs. These development agencies seldom know what their sister agencies are doing, so they lack the knowledge of where they might be overlapping, duplicating, and/or conflicting with each other. Even more troubling, the recipient government frequently has little knowledge of what the many organizations are doing in its country, information that is essential to good government planning, budgeting and accountability to citizens.

Transparency is beginning to take hold in Africa. Malawi is one country that is paving the way. In 2013, it held a workshop for stakeholders for using open data for evidence-based policy. The workshop was supported by the Open Aid Partnership, the World Bank Group, and the United Nations Development Program. The workshop launched the Aid Management Platform (AMP), which makes public information on development programs. 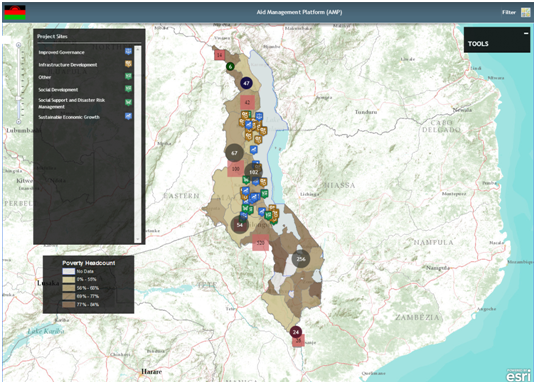 The purpose of providing the data through the platform is to promote its use for planning, coordination, and citizen engagement. With 60 to 80 percent of the development budget of Malawi financed from external sources, having this information available for both government and citizens is essential for good policy-making and program management.

Malawi has recently had issues with fraudulent use of public funds, and, as stated at the launch by Minister of Finance Mawell Mkwezalamba, “Greater transparency of development activities would help Malawi to guard against further corruption and waste in the use of development resources.”

What will make this new platform even more useful is when it can draw the data from the International Aid Transparency Initiative (IATI) registry. Currently the data in the Platform must be collected from individual donors by the government of Malawi. This is time consuming, the data is not in a comparable format, and the data is incomplete. However, if most donors, public and private, meet the deadline of the end of 2015 for posting all aid data to IATI, then this open data platform will provide the information that will empower the government to better plan and allocate its resources and its citizens to hold the government and donors accountable.

Other governments in Africa are joining the movement. Tanzania included strong commitments on open data and IATI in its Open Government Partnership National Action Plan. Ghana has made a huge commitment to transparency by co-hosting IATI, along with the UNDP, UNOPS, and Development Initiatives.

Let’s hope the example of these three countries is discussed at the historic meeting of African leaders in Washington the first week of August and that their peers come to understand that transparency is a key to responsive government in securing the engagement and support of its people.

George Ingram is the Senior Fellow in the Global Economy and Development program at the Brookings Institution. He is also the Chair of Publish What You Fund’s U.S. Advisory Committee. He formerly served on the professional staff of the House Committee on Foreign affairs and as deputy assistant administrator at USAID. He focuses on development effectiveness, aid reform, and foreign affairs advocacy.