Home / Blog / What we want to see in the U.S. ranking vs. what we expect to see

Last week, I spoke at the USAID Frontiers Forum, explaining how aid transparency can help eradicate poverty by 2030. Right after me, in another (albeit larger) room, Secretary Kerry told a packed audience about the importance of transparency and open data.

As far as we at Publish What You Fund are concerned, the more people talking about the importance of aid transparency the better. Especially when they are Secretaries of State.

But the $50 billion dollar (in aid) question remains: what will the 2014 Aid Transparency Index (ATI) tell us about the progress of US agencies in the last year?

We will launch the 2014 ATI at the Center for Global Development in D.C. on Wednesday 8 October, at which point we’ll see where some of the world’s largest donors all stand in the aid transparency ranking.

In the U.S., here is what we want to see vs. what we expect to see. 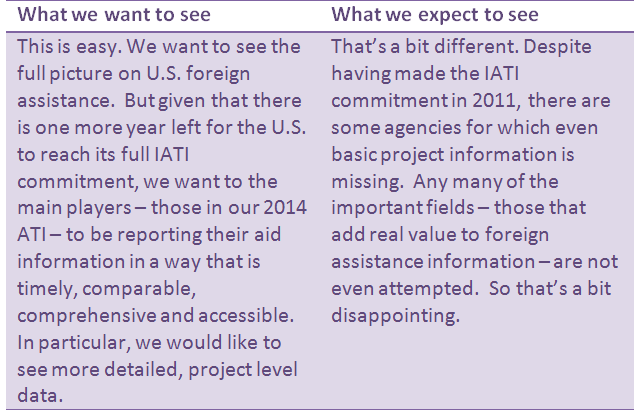 But it is not all gloomy – we were encouraged by some last minute pleasant surprises (special mention here to PEPFAR), which gives us reason to be optimistic.

At the risk of sounding less than humble, we believe that the ATI is driving progress – both here and among our other donors that we rank.  We think competition in the transparency agenda is creating a race to the top.  Certainly in the lead up to our data collection cut off for the ATI, enormous amounts of new information has been published.

In the U.S., for example, there are now two new agencies publishing their information to the foreign assistance dashboard and therefore IATI: the State Department and PEPFAR. Why does this matter? The quick answer is size and relevance. State is second largest U.S. foreign agency and PEPFAR is the largest sector specific initiative in the world.

In addition to creating competition, though, we also want to ensure a constructive discussion.  What are the lessons learned over the past few years?  What are the issues that keep coming up again and again?  Are there best practices that agencies can both learn from and apply?

At its core, IATI is both a political and a technical undertaking.  One of the key factors to success, therefore, is that for any agency undertaking IATI publication, the policy and technical leaders need to both be at the table.  We have seen that lesson play out both in the U.S. and elsewhere.  And that should give hope to all agencies that publishing good quality information is feasible.

We often hear that one of the biggest obstacles to meeting the U.S. commitment is the cost of upgrading various information systems.  A few points on that.

We look forward to our launch – not just to announce the results and findings, but also as an occasion for constructive and candid discussions about what it will take for the U.S. to really step up and meet the commitments to publish fully to IATI by the end of 2015.

We aren’t alone in the community to be pushing hard to make aid transparency a real deliverable by the U.S.  MFAN, Oxfam, InterAction, for example, have all been contributing to the learning and the progress.  But what we would like – and need – in this year’s discussion is a strong political commitment by our government leaders.

How the U.S. fares is not just a question of us as a nation keeping our word and delivering on our promises.  The U.S. is the world’s single largest bilateral donor, accounting for about 13.5% of foreign aid flows.  That means that the full picture of U.S. foreign aid information is critical to having a full picture of all spending.  Let’s not have the U.S. be the reason that the promise of aid transparency fails globally.  I, for one, know that it doesn’t have to be.

Come join the discussion at our launch on the 8th and see the full 2014 ATI results.