Many of you will have heard the news of my recent departure from Publish What You Fund, and are hopefully spreading the word of the team’s search for a new Chief Executive. So I wanted to take the chance to use this last blog as an opportunity for reflection.

When I took over two and a half years ago, a lot of promises had been made, but not many had been met. We set ourselves an ambitious target – to get all the world’s biggest aid providers to join the likes of the World Bank, EU, DFID and Canada and deliver on their commitments, made at the Busan High Level Forum on Aid Effectiveness, to publish information on their activities to the International Aid Transparency Initiative. It is exciting to see how far we have come in a short time. Germany, the U.S., France, Japan and many other bilateral agencies are now publishing transparent data in an accessible, comparable way.

That means that 83% of ODF is accounted for by IATI publishers. But it’s just as exciting to have different sources of development finance available via IATI too. Just this week, the European Investment Bank published its first data. I’m particularly proud that philanthropic foundations – including the Bill and Melinda Gates Foundation – and Climate Finance providers have also joined the party. With NGOs already forming the largest group of IATI publishers, it will be interesting to see how the aid transparency community develops as it expands further beyond traditional donors to incorporate new actors. Private companies are starting to come on stream, and next challenge, as I see it, is to persuade South-South Co-operators of the benefits of joining a standard.

IATI’s success has been built on two important principles. The first is co-operation for mutual benefit. Several agencies have wrestled valiantly to convert data from multiple systems, in multiple formats, to make it meet the comparable IATI standard. The second principle has been not to second guess who might use the data (a common mistake in the transparency world). The potential created by making everything fully accessible and searchable for everyone has not yet been tapped – but it is tremendous.

Nonetheless IATI could be improved. As new and varied categories of publisher start to come on board, IATI will have to perform a fine balancing act. Some current fields will not be relevant to new providers – and they may have other useful information that is not currently captured. On the other hand, it is essential that the standard continues to challenge all its publishers to collect and release new kinds of information, without being diluted or accepting blanket opt-outs on often spurious grounds (notably commercial confidentiality). It may be that IATI becomes a collective front end for a range of inter-operable standards, designed for different types of development finance provider – foundations, aid agencies, NGOs, development finance providers, climate financers and so on – with a substantial common core.

Though Publish What You Fund has hit its initial targets in terms of the scale and range of transparent publishers, there is still a great deal to do. Much of the information being published is late, partial and of low quality. That is one of the reasons why Publish What You Fund recently launched the Road to 2015 campaign: to put extra pressure on donors to fulfil their promise to publish everything transparently, not just dip their toes in the water or convert out of date data. There is a need to deepen as well as broaden transparency development information. Until it is comprehensive, timely and accurate enough to be fully comparable, it won’t be useful.

Publishers also need to pay far more attention to the fields that distinguish IATI from the DAC: data on impact, results and precise location, for example, are what people in developing countries are asking for. Focusing on these areas also has the potential to bring different providers together. The ultimate goals of aid agencies, investors, philanthropists, NGOs and South-South Co-operators have much more in common with each other than their methods or motivations do. If they start looking at each other’s data, and working together to agree better common formats for recording critical but elusive information on results, a virtuous circle could be created. Not only will the incentive to publish be greater, new synergies could exponentially increase impact. Moreover, the Paris principles of better harmonisation, co-ordination and partnership with developing country governments can finally be met, enhancing accountability all the way down to citizens.

Publish What You Fund has been so effective because we have focused on a small, specific ask. However, our theory of change is ambitious. We have been a small but critical cog driving a big lever (aid effectiveness), within a huge wheel (better development outcomes). No-one thinks that transparency is a panacea – nor that aid is the best way to eliminate poverty. They are staging posts. Sustainable improvements in people’s lives are hard-fought. The most accountable governments in the world rarely stepped out of their unscrutinised comfort zones without a fight. Some of those same governments still see technical difficulties as an excuse not to become fully transparent! The ongoing discussions on post-15 sustainable development goals have recognised the importance of a Data Revolution that empowers everyone, in their own contexts. 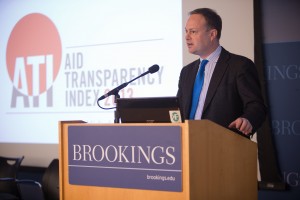 It remains to be seen whether the post-15 goals focus on better governance, but transparency will play an important part. Progress needs to be more effectively and visibly measured. And the development community needs to be brave enough to think about hard to measure aspects of change too. There is a need for humility about how different countries got to where they are today. Domestic accountability to the poor can’t be imposed from outside, but information can help people in their struggle – if it’s the information they want! And external finance providers need to embrace accountability as well as transparency too, demonstrating more boldness and honesty about what they are trying to achieve and why; not just how.

Publish What You Fund is all about focusing hard on a small, critical point, in order to leverage big change. The next step is to think about helping that change to happen; how to help citizens to put newly transparent data into their own contexts and use it for they own purposes.

I leave Publish What You Fund knowing the team will continue to see great success and bring about real change. And I wish them the best of luck!