Last week, I attended the launch of Publish What You Fund’s 2014 Aid Transparency Index (ATI) at the Center for Global Development here in Washington, DC.

During the event, one thing became clear to me: aid agencies around the world are hearing the drumbeat of the global aid transparency movement—and they’re beginning to respond. While a number of agencies saw their ATI score improve over the last year, one of the most notable improvements in this year’s index was achieved by the U.S. President’s Emergency Plan for AIDS Relief, or PEPFAR. 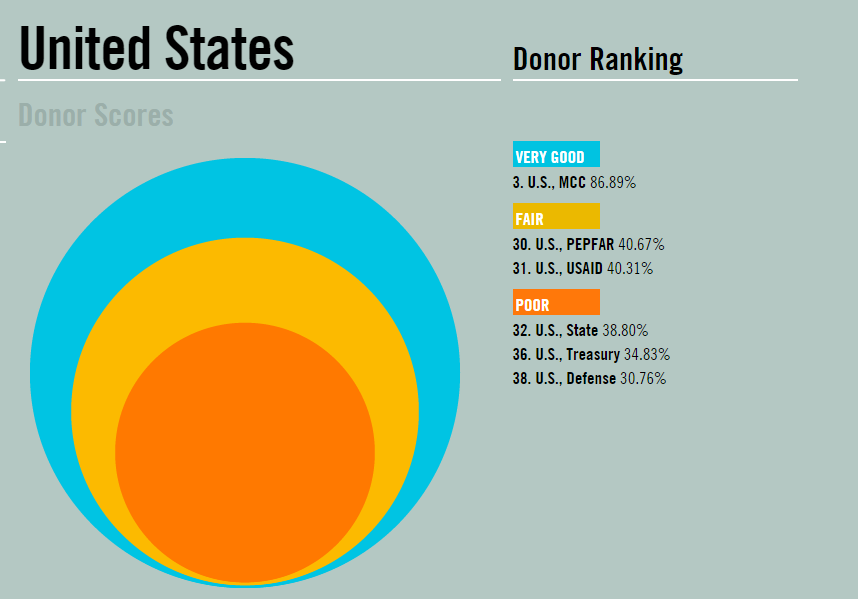 Despite being the single largest bilateral contributor to the global AIDS response, PEPFAR was among the poorest performers on the 2013 ATI; it ranked 50th out of 67 agencies evaluated, earning itself the rather grim classification of “very poor.” For those of us who have spent a considerable amount of time sifting through AIDS financing and programming data, this did not come as a complete surprise at the time. In a year, however, the program has jumped 20 spots in the index, leapfrogging other organizations to now be the 30th best performing out of 68 agencies. This is a significant and welcome improvement.

The progress PEPFAR has made in just one year demonstrates that, with effort, progress toward reaching the goals of improved transparency and accountability can be made, even for those agencies that have the longest way to go.

The key to progress, however, is commitment.

Since her nomination to the post of U.S. Global AIDS Coordinator, the official charged with overseeing PEPFAR, Ambassador Deborah Birx has made her focus on the issue clear, citing “transparency, accountability and oversight” and one of the four pillars central to realizing President Obama’s vision of an “AIDS-free generation” in her testimony to the Senate Foreign Relations Committee. Speaking on a panel at last week’s launch, the Ambassador also reiterated the importance of data transparency in illustrating the impact of global health investments:

“In this day and age where so many people have needs domestically, to really show the translation of American taxpayer dollars into a hugely impactful program that’s not only saving lives but changing the course of the pandemic is really extraordinarily important.

PEPFAR’s jump in the ATI, along with the launch in June of the PEPFAR Dashboards, an online resource presenting planned budget, impact and expenditure data, is a sign that this commitment is beginning to be put into action.

But as Ambassador Birx noted, despite this progress there is still “a ways to go.”

This past summer, my organization, amfAR, The Foundation for AIDS Research partnered with AVAC to launch Data Watch: Closing a Persistent Gap in the AIDS Response, where we made the case for why the improved collection and reporting of strategic financing and programmatic data is needed if we are to sustain an evidence-based and impactful AIDS response. Timely, reliable, pertinent, and transparent data on investments and how those investments affect the lives of people on the ground, particularly difficult to reach ‘key populations,’ is essential to ensuring that no one is being left behind.

Encouragingly, Ambassador Birx has reiterated her desire to begin presenting more granular, site-level data in the future, linking investments to results. Given PEPFAR’s central role in driving the global AIDS response, it is crucial that OGAC (the Office of the Global AIDS Coordinator) follows through on this commitment.

Ambassador Birx and OGAC should be congratulated on PEPFAR’s jump in the ATI; as advocates, we must make sure that the values of the data transparency movement remain at the center of their ongoing efforts to make measurable impacts on global health.