This is a guest blog written by the European Union Delegation to Myanmar. All photos credited to Leigh Mitchell.

Donors and aid have flooded into Myanmar since the Government began its democratic transition and unprecedented social and economic reform programme in 2011.

Myanmar officials quickly realised that it would be difficult to manage and guide this assistance without the ability to track aid activities and expenditure across the country. As a result, the Government decided it needed a simple and effective information management system to gain a more accurate picture of foreign assistance to Myanmar and to ensure aid money can be directed to where it is most needed.

“Our vision is to move toward a situation where we can be sure that all international assistance to Myanmar is being used as effectively as possible,” an official from the Ministry of National Planning and Economic Development told Devex.

Officials first spoke to their counterparts in neighbouring countries to gauge their experiences with Aid Information Management Systems (AIMS) and also visited Timor-Leste to learn from their experiences in managing aid. As a result of these exchanges, Myanmar decided to build its own ‘home grown’ AIMS to ensure the finished product would respond to the country’s particular needs, be online quickly, and be able to expand and develop in line with future changes on the ground.

The next question faced by Myanmar was what format development partners should be asked to provide their data in. The news that the International Aid Transparency Initiative (IATI) had recently agreed a standard and that a large proportion of Myanmar’s development partners had signed up to publish to this standard was very much welcomed. It was quickly agreed to develop the AIMS directly in line with the IATI standard from the outset. Myanmar itself also decided to join IATI in June 2014 and is an active participant in the Steering Committee meetings and Partner Country Caucus. Having decided on the overall approach, the Government, with European Union support and via the International Management Group (IMG), hired Catalpa International to help create the system. 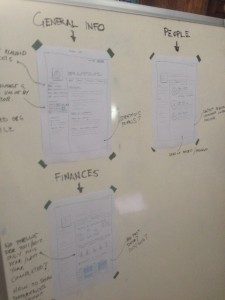 opment team began by spending several weeks within the Ministry of National Planning and Economic Development to understand their information needs and how aid reporting currently worked. The system was then designed and built in collaboration with the Ministry and trialled and revised with officials, while a first round of data was collected from development partners.

The system is called Mohinga, and goes online on February 7th 2015 with approximately 80% of ODA to Myanmar currently recorded. It is the first locally-built, IATI-compliant, mobile-ready, open-source AIMS. Mohinga refers to a local fish soup enjoyed by Myanmar citizens for breakfast every morning – reflecting local ownership of the system and aid management more broadly, along with a belief that aid should be something to initiate and foster domestic resource mobilisation.

Mohinga was built to be simple to use, removing many of the barriers that can make aid information management difficult and time consuming. The application runs in both English and Myanmar languages and enables users to visualise aid flows via a variety of charts and graphs. Users can also export all of the raw data in .csv format, allowing them to delve into full data sets. Development partners update their information via an easy-to-use online data entry form.

But it hasn’t all been plain sailing. While the system was origina 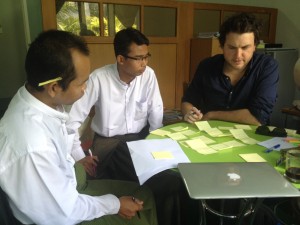 lly built to import data directly from the IATI Registry, it was found that many development partners weren’t yet reporting accurately or in detail (or indeed at all) to IATI. This means that manually inputted data is being used for the time being, but in an IATI-compliant format. As the quality of data from IATI publishers is improving, soon the system will be able to pull in automatic imports from the IATI Registry for those development partners that are reporting comprehensively to the standard.

Another small headache was how to record multi-donor trust funds accurately and comprehensively while avoiding double-counting. Working in partnership with fund managers, solutions were eventually found, but this is an issue that needs to be carefully reviewed as more data starts flowing.

Once the system goes live, the plan is to publicise it widely to ensure people access and use it, which will provide a further incentive for development partners to keep it updated. Training will also be offered to Parliament, civil society and other stakeholders around the country to show them how the system can be of value to them.

Visit http://mohinga.info/en/ to view the platform.