Those familiar with our work will know that every year we assess how transparent donors are in the annual Aid Transparency Index. To do this, we monitor what’s being published over a period of around three months to give a reliable snapshot of the current state of play.

Last Friday, our research team were busy taking the final readings, before we verify it through sampling and put it all together into the 2016 Aid Transparency Index.

This Index marks the end of an era at Publish What You Fund. December 2015 saw the deadline for donors to meet their promise made in Busan in 2011. They promised to make their aid data fully open and transparent by publishing to a common standard.

Each year since then, we have measured their progress and shown who has made genuine strides towards an open agenda – who has merely paid lip service – and who has not made any effort at all.

To give donors a final push we ran the Road to 2015 campaign; a coalition of NGOs calling for the promises made at Busan to be met. A few months ago we undertook a mid-year review to see how the US and EU agencies were doing. The findings were mixed, with some doing well, but others – including some very large providers – a long way off-track from meeting their commitments. So has anything changed?

The 2016 results here are carefully guarded whilst we thoroughly check and analyse our data, but we can say that we expect progress to be shown. There may be surprises, with late surges from some notable donors in the final months. What we also know is that many donors, some large and influential, have not met their promise and have not done much more than show a vague interest in opening up.

Many believe that existing reporting mechanisms to the OECD, for example, already fulfil the need for transparency. This is not the case. We produced this infographic to illustrate exactly how much aid is not visible to partner countries when donors don’t publish their aid information in full and, critically, on time. 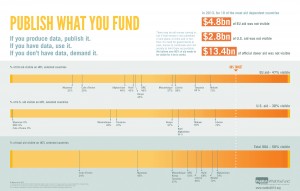 In 2013, for 10 of the most aid dependent countries in the world, over $13 billon – or some 42% – of official donor aid was not visible at the time. Official aid reporting has important uses, but does not fulfil the needs that partner countries and the wider aid community have for open data. One of the key lessons of the aid effectiveness agenda is the need for data to be timely to support planning and coordination efforts.

This is what we mean by “visible” – not made public 1-2 years after the fact, but now.

We believe over 80% of aid needs to be visible on IATI in order for it to be truly useful to donors, partner countries and civil society. By not publishing timely and comprehensive open data, some of the largest donors are still letting the global picture down.

But why is this? With transparency accepted as a core principle of effectiveness, including at Busan in 2011, at the G8 in 2013, and Financing for Development in 2015, why have some donors not shown any significant progress since we first started assessing them five years ago?

Some donors also argue that there is no demand or need for this data. Our documentary film, made in partnership with our friends at Development Initiatives and AidData, shows the demand and use of open aid data in Nepal. The film shows the growing body of data users, from journalists, to Ministry of Finance employees to donors themselves. 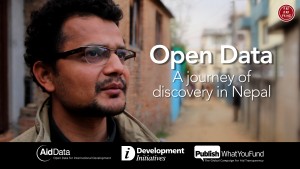 In 2016, we will continue to work with donors to improve the quality and use of their publications; and we will continue to challenge those who aren’t yet on board with this transformative agenda. It’s time to raise ambitions further: In the past five years, transparency has become the norm. Donors who still don’t get it will be left further behind.

If you don’t publish what you fund, what are you trying to hide?