This blog was written by Megan O’Donnell (Center for Global Development), Alex Farley-Kiwanuka and Jamie Holton (Publish What You Fund). It was first published on the CGD website.

As the COVID-19 pandemic and global recession exacerbate resource constraints with outsized consequences for women and girls, there is an increased need for clear and consistent data on the extent to which bilateral and multilateral donors are prioritizing gender equality in their financing, and to what end. Without accurate data on the funding of and results from gender equality projects, we cannot hold donor institutions accountable for their gender equality commitments, nor ensure that funds spent are meeting populations’ needs.

Preliminary findings from the Gender Financing Project, a joint initiative by Friends of Publish What You Fund and Publish What You Fund, with advisory support from experts at CGD, UN Women, FEMNET, and elsewhere, shed light on how donors are spending on global gender equality—and what we still don’t know based on available data. The Gender Financing Project has analyzed the 45 highest disbursed gender equality projects by major donors in 2018 in three countries: Kenya, Nepal, and Guatemala.

Its starting point is the Organisation for Economic Co-operation and Development’s Development Assistant Committee (OECD-DAC) Creditor Reporting System (CRS) data and its gender equality marker. The CRS is a comprehensive and authoritative database that provides consistent and coherent information about aid spending by DAC donors, and spending voluntarily reported by non-DAC donors. The project also looks across other datasets, including those housed by IATI (the International Aid Transparency Initiative), which is intended to be used by all organizations in development and complements financial flow data by including data on project results and the ability to attach project documents. Finally, it looks at countries’ national aid information management systems (AIMS) and donors’ own project databases.

Most platforms allow donor agencies to report on their disbursements, commitments, or general budgets for their gender equality projects. This is often done on a yearly basis, although in the case of IATI best practice is on a monthly basis. This allows donors to indicate what they expected to invest into projects versus their actual investments in specific years. We can use this reported information across different platforms to answer the following question:

Does existing data provide us with a clear, consistent picture of donor agencies’ spending towards gender equality projects?

An initial look suggests that the answer varies by donor. Some donors only report to the OECD CRS, making cross-referencing impossible. Where donors do report across multiple platforms, some report consistently, whereas for others, the more data you see on a given gender project, the blurrier the picture becomes. In one—and by no means the only—example, DFID (now part of the Foreign, Commonwealth & Development Office ) reports for the same gender equality project in 2018 to have spent $6.3 million to the OECD, $5.4 million to IATI, $7 million to its own project database the Development Tracker, and $9.52 million to the Nepalese AIMS system called AMIS. Such conflicting information can at best create confusion, and at worst lead to ineffective decision-making around gender equality programs by other donors, organizations, and partner governments.

The number of projects donors fund in these countries can also vary across platforms. This is because donors either do not use the same gender labels for their projects across platforms, or because they apply labels differently depending on the platform. Take for example the number of gender equality projects reported by the top five donors of gender equality funding in Kenya in 2018 across two major data platforms:

2. What sectors do gender equality donors focus on?

Many platforms allow donors to apply sector classifications to indicate in which sectors their projects are investing. A commonly used sector classification list is the OECD’s five-digit “purpose codes,” available here. The first three digits of a purpose code refer to a wider sector category, such as Basic Education (112) or Agriculture (311), and the last two digits indicate a more narrow subsector, such as Early childhood education (11240) or Agricultural policy and administrative management (31110). Some AIMS systems require donor agencies to apply a partner government’s own sector codes. We can therefore ask:

Does existing data provide us with a clear understanding of which sectors donors are prioritizing for their gender-focused aid?

Donors are generally consistent in indicating the sectors their gender equality projects fall into, even across different platforms. But if we look at multiple donors’ investments in a given country, it is unclear whether donors have any kind of coordinated or joint strategy in developing their sectoral priorities. Take the following snapshot of gender equality aid going to Nepal: 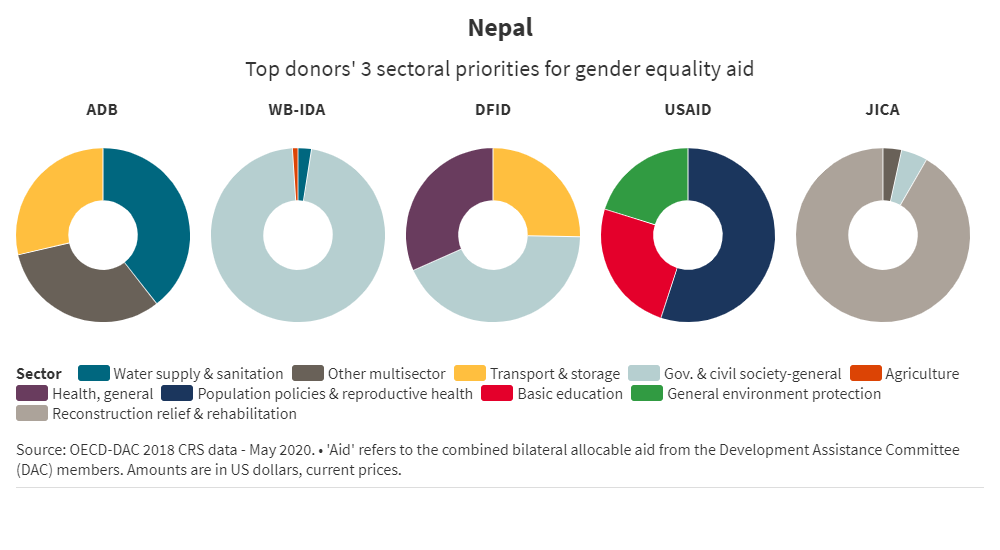 The top five gender equality donors have a total of ten priority sectors in Nepal, which may suggest that donors have coordinated to prioritize complementary investment areas, but it may also reflect a lack of cohesive sectoral strategy across donors. The only sectors that appear across donor priorities are “Transport & storage” (ADB and DFID) and “Government & civil society – general” (World Bank, DFID, and JICA). Current data also does not explain why these sectors are priority areas for donors’ gender equality spending. The data therefore raises new questions:

Do donors direct gender equality funding to sectors that serve their own strategic political purposes—or do they identify the catalytic sectors for promoting gender equality in partner countries and then direct their funding accordingly? And to what extent are top donors coordinating to complement each other’s sectoral priorities for gender equality?

To answer these questions, the Gender Financing Project is now conducting key informant interviews with relevant stakeholders in Nepal, Kenya, and Guatemala to better understand donors’ priority sectors and how their investments further gender equality. We will also analyze partner governments’ gender and sectoral strategy documents to assess how well donors’ funding is aligned with partner governments’ priorities.

3. What are gender equality projects achieving?

For gender equality advocates, policymakers, donors, and practitioners, the most important question should be:

Are these investments producing positive results?

Looking at databases that do allow donors to submit such results data, the Gender Financing Project’s preliminary findings underscore an issue highlighted in Publish What You Fund’s 2020 Aid Transparency Index: a lack of performance-related data is a persistent issue among many donors. From the project’s preliminary assessment of 45 major gender equality projects across Kenya, Nepal, and Guatemala in 2018, comparing IATI, Nepal’s AMIS, and Kenya’s E-ProMIS, and several donors’ own databases, donors only published expected or achieved results for 14 projects. Two outliers here are the Asian Development Bank and Global Affairs Canada, which reported results for all of their assessed gender projects. While the samples of 15 projects for each country only represented at most 2 percent of gender equality projects reported to the OECD in these countries, their disbursements made up almost a fifth of the total gender equality aid received in Kenya, almost half in Nepal, and over a quarter in Guatemala. So, donors are making significant gender investments with these projects, but tracking their results is a real challenge.

Transparent and accurate information on donors’ gender equality financing data matters. It allows donors to coordinate resources and avoid duplication, fill funding gaps, and align priorities. It also enables donors—and other stakeholders—to justify and to learn from their investments, thereby strengthening their accountability. The preliminary findings of the Gender Financing Project suggest that existing data varies widely in availability and quality, making it difficult to offer conclusive insights into donors’ gender equality spending, priorities, and impact.

The variability among donors’ reporting on their gender equality investments raise important questions:

Why do some donors report to many platforms while others do not? What drives inconsistencies in some donors’ reporting and enables consistent reporting in others’? Which factors influence donors’ sector priorities for gender equality? And finally, how do we move from a focus on financing flows to concentrate on how donor investments demonstrate impact in narrowing gender gaps?

The Gender Financing Project’s deep-dive into quantitative data will be paired with in-depth discussions with donors and partner governments, as well as with implementing organizations and academia, to see how we can better understand and hold donors accountable to their gender equality commitments. Going forward, we are interested in evaluating the complementarity of the different databases and determining if and how these should be harmonized. Ultimately, the project will provide specific recommendations for better publication and sharing of data so that it is more timely, consistent, and useable for all interested parties.

The Gender Financing Project receives support from Plan International USA and Save the Children US.

The visuals in this blog were created with Flourish