At the start of November 2021, Publish What You Fund’s Development Finance Institution (DFI) Transparency Initiative marked a new phase in our project with the launch of our DFI Transparency Tool and our report Advancing DFI Transparency. To accompany the launch, we are publishing a series of blogs that discuss the process of developing the tool and introduce its key components. In the first blog of the series I reflected on the two years of research that have informed the creation of the tool. We have since dived into the first three components of the tool: core information, impact management, and environmental, social and governance (ESG) and accountability to communities. This blog discusses elements of the tool’s fourth component – financial information – and argues that improved disclosure of both mobilisation and concessionality is critical to scaling up financial flows in support of the Sustainable Development Goals (SDGs) and achieving development impact.

The need for more (and better) development finance

The need to increase flows of finance to developing economies is well documented. This need was probably most popularly captured by the agenda of major multilateral DFIs to expand funding for the SDGs from “billions to trillions” that was announced in 2015. However, progress towards this goal has been slow, to the point of casting doubt on whether the target is at all possible. A report from ODI found that in low income countries DFIs are only mobilising US$0.37 for every US$1 they invest. But attainability aside, the need for increased mobilisation remains a cornerstone of making progress towards the SDGs, progress which in turn necessitates increased transparency of financial information from DFIs. If shareholders are to direct DFIs to better target investments or sectors where mobilisation is greatest, the private sector are to accompany DFIs in investments in emerging markets, and taxpayers are to support the use of scarce development capital, it is critical that DFIs are transparent about their deployment of concessional funds and their mobilisation of private finance.

Concessional (or subsidised) finance is used by DFIs to de-risk certain investments, making high credit risk propositions investable. This form of investing – mixing concessional funds with market rate funds – is commonly known as blended finance. The concessional finance in blended finance deals is often public or philanthropic money and, as such, is an increasingly scarce resource. While an important tool, it is important that subsidies are used only when necessary and are no larger than is necessary. In other words, it is important to establish that blended finance investments offer good value for the providers of concessional funds. This is hard to ascertain when DFIs are not transparent about the level of subsidy that is attached to an investment. One notable exception to the current low levels of transparency comes from the International Finance Corporation (IFC). Following a commitment to disclose levels of concessionality in the World Bank International Development Association (IDA) private sector window (PSW) investments that they manage, IFC have rolled out disclosure of concessionality levels for all of their blended finance operations. This is an important development in the sector and promotes both intra and inter-institutional learning from blended finance experiences. While different financing operations may require different reporting regimes, it is now time for other DFIs to follow IFC’s lead and disclose the concessionality in their blended finance operations.

It is worth observing what happens when a DFI begins to disclose more information about its use of concessional finance. Through his work at the Center for Global Development (CGD), Charles Kenny has long cast a critical eye on the use of IDA concessional funds by IFC through the PSW. And while it may prove impossible to draw a direct line between the two, Kenny’s calls for competitive, capped, and transparent approaches in the IDA PSW have been mirrored in policy changes. More recently, Kenny has queried the use of concessional funds through the PSW to fuel the post-Covid economic recovery, highlighting the fact that investments are not targeted in the most efficient way. On the face of it, this level of scrutiny may make it appear that the incentives for DFIs to disclose more information about their concessional investments are weak. But, it is precisely this sort of engagement that encourages DFIs to invest in better, more impactful ways and holds them to account when they don’t. Rather than shying away from the challenge, IFC have opened their books to stakeholders and their transparency and policies have improved as a result. It is important this practice becomes more widespread.

The private sector has a central role to play if investment in developing economies is going to increase sufficiently to achieve the SDGs. Numerous multilateral DFIs publish aggregate data on mobilisation through two sources; the DFI Working Group on Blended Concessional Finance for Private Sector Projects, and the MDB Joint Report on Mobilization. These reports provide useful data on the broad trends in DFI blended finance and mobilisation generally, but the lack of disaggregate data is a limitation. Data from 2019 MDB Joint Report on Mobilization of Private Finance shows that mobilisation is still heavily concentrated in middle income countries: 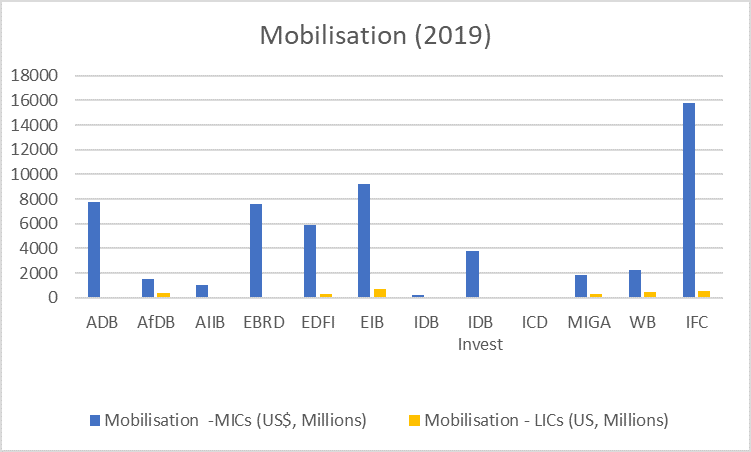 This is not surprising: middle income countries inevitably have greater volumes and scales of financeable investment opportunities yet, if the SDGs are to be attained, the imbalance needs to be addressed as much as is practically possible. One way to do this is to clearly identify the sectors, countries, and investment types that mobilise the most capital. This in turn relies on consistently reported project level data. However, analysis we conducted in our fourth workstream shows that of 172 investments surveyed, only five contained any information on mobilisation. This lack of transparency is hard to explain, particularly given the fact that major DFIs are reporting aggregate figures both as a group and to the Organisation for Economic Co-operation and Development (OECD). If DFIs are in possession of aggregate data, it follows that they must have the underlying project-level data from which the aggregations are derived. The barriers to disclosure also appear lower than for concessionality where progress has begun to be made. While clients may not wish a DFI to disclose the use of concessional funds as it could be taken as an indication of their high levels of risk (although this must be balanced with the benefit of accessing concessional capital), it is hard to see what commercial sensitivities would be relevant in the case of mobilisation. 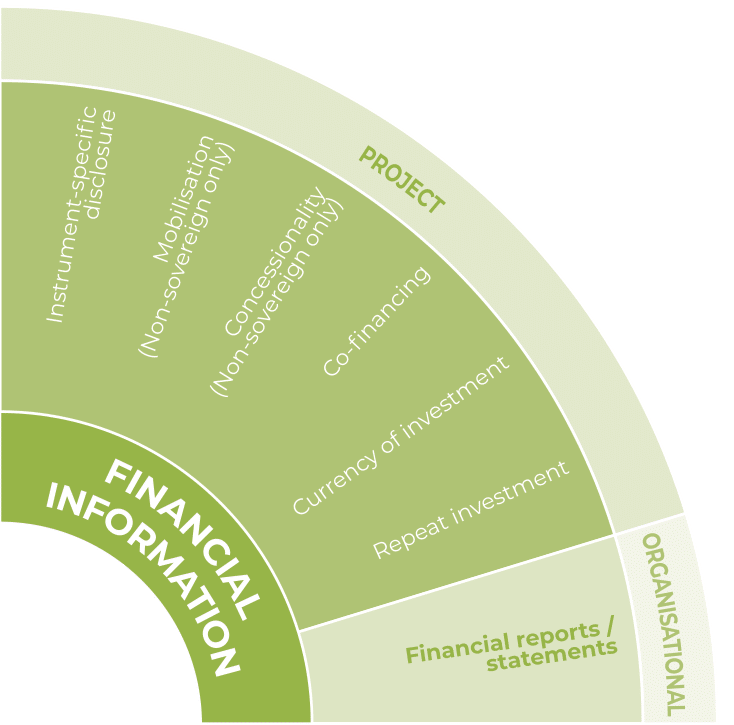 Disclosure of concessionality and mobilisation data are key aspects of the Financial Information component of the DFI Transparency Tool. The tool provides granular guidance on the types of financial information that as a minimum DFIs should disclose about their investments. Disclosing in line with the tool will enable DFIs to improve transparency practices and make them more accountable to the wider public. Furthermore, it provides a framework for the assessment of DFI transparency.

Our research has shown that disclosure of information in line with the tool is ambitious but achievable. Furthermore, stakeholders have identified the information defined by the tool as important, highlighting the need for DFIs to act now to improve their disclosure. Among other reasons, this will help DFIs and other investors to identify the types of investments that are most effective at mobilising much needed capital to developing economies.

The tool has received the support of a number of stakeholders including the EBRD and US DFC at the launch event. To further encourage change within the sector we will be using the DFI Transparency Tool as the framework through which we will analyse the transparency of leading DFIs during 2022. Over the next few months we will be consulting on a methodology for this analysis with a view to publishing an initial assessment and ranking in a year’s time.

The demand for change: reflections on two years of investigating the transparency of development finance institutions

What is core information and why is it fundamental to the transparency of development finance institutions?

Why do DFIs invest in financial intermediaries and why do we need to know more?