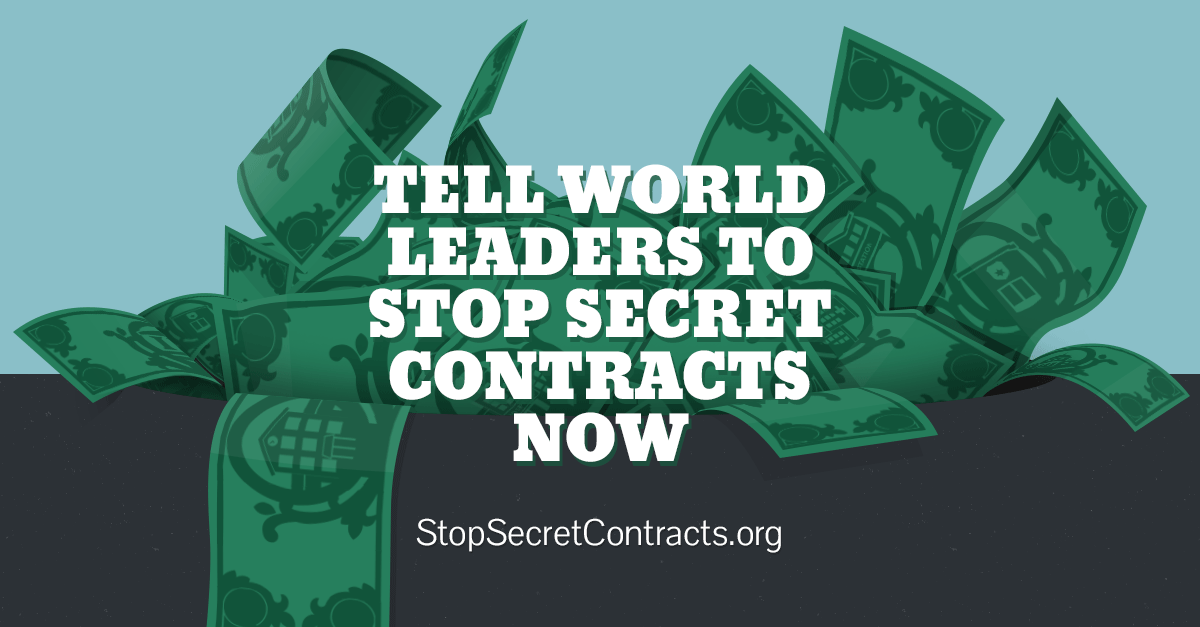 Today sees the launch of a new global campaign, Stop Secret Contracts, calling on world leaders to end secrecy in public contracting. The campaign is coordinated by the Open Knowledge Foundation, and currently has over 30 organisational signatories including Global Witness, Integrity Action, the International Budget Partnership, the Sunlight Foundation and Transparency International.

The need for openness and transparency in contracting is an issue which has gathered increasing momentum in recent years. The global value of government contracts estimated at $9.5 trillion [1], but even in countries with strong government transparency laws the contracting process is often opaque and unaccountable. In both Africa and the EU, estimates suggest that around $150 billion is lost annually to corruption and mismanagement. [2]

The campaign will focus on securing commitments and action from government leaders around the world to increasing openness and transparency in their contracts. The campaign has support from organisations across the world, from the Hungary to Nepal to South Sudan, and will be targeting governments at both national and international levels to secure reforms.

“Every year, millions of dollars of public money are lost to fraud, corruption, and payments to contractors that don’t deliver. Openness of key contracting information is essential to allow us to hold governments to account, and ensure that public money is used for public good.”

“One set of secret deals signed by the DRC government with obscure companies may have cost that state twice its annual education and health budget.  Secrecy in how contracts are handed out and what they say robs citizens of the ability to know who got the contract, how they won and whether it was a good deal for their country”

“Secret contracts are never about public interest and only serve as conduits to satisfy the selfish interests of a few. Giving relevant information about public contracts to government entities, parliaments and civil society contributes to a more stable investment environment, and allows good governance and the rule of law to prevail.”

“Openness in public procurement from conception through contracting to evaluation is essential to fight against corruption and ensure that there is equality of opportunity for business and oversight by civil society.”

Claire Schouten, Programme Director of the Network for Intergrity in Reconstruction at Intergrity Action said:

“Secret deals sideline the very people they should benefit. It’s time to open contracting, so citizens enjoy the dividends.”

Seember Nyager, CEO of the Public and Private Development Centre in Nigeria said:

“Clearly open contracting has come of age. For countries such as Nigeria, disclosure all through the contracting process is the only way to break through the current barriers of mistrust that exist between the public and the Government.”

Individuals who support the aims of the campaign are invited to sign the petition at StopSecretContracts.org. Organisations who would like to give their support can get in touch with the Open Knowledge Foundation on contact@stopsecretcontracts.org.

For comment and interviews, please contact Theodora Middleton <theodora.middleton@okfn.org>. More about the Stop Secret Contracts campaign can be found at: StopSecretContracts.org.